A couple of years ago I discovered Shadow, Sword and Spell, a pulp fantasy RPG from Rogue games.  I’ve only had the chance to play it once, but I am going to be running a short, two adventure game of it this week so I thought I’d take the chance to capture some of my thoughts on it.  Since it is only going to be a two week game I made up several characters for the players to choose from so that we could get right down to it, especially since none of the players have any experience with it. Character creation is fun and all, but it can also be time consuming, especially when you need to teach everyone an entirely new ruleset.  Which SS&S has, something that only uses a d12. A d12! The most neglected of all dice.  At first I assumed that the game would be nothing other than rolling for Barbarain Hit Die and damage from a greataxe, but it turns out there are other things that you can do with a d12.

I wanted to walk through character creation and sort of start to check out the rules that way.  In general I found making a character to be pretty easy, but the characters that you wind up with are sort of odd.  There is no rolling for attributes or skills (its not preferred for me but I am fine with it) but there is a selection of a Culture and a Modifier which can result in some strange traits for a character.  Culture gives a character a couple of skills, usually at a high level of aptitude. The Modifier gives a bonus (and maybe a penalty) to a couple of skills. Let’s take a look at the Assassin type character I made up for the group.

While recently playing through the Ghost Tower of Inverness, the brave adventurers turned a corner in the long abandoned dungeon and encountered (rolls on the wandering monster chart)…a leucrotta! Yes, the feared leucrotta. Bane of adventurers and haunter of nightmares.  It’s description is…well, I actually don’t know. I am going to be honest for a moment, I’ve never heard of a leucrotta. In all of my many years of playing D&D I have somehow managed to not come across this creature of legend. And if I had it has left absolutely zero impression on me.  I had to look it up in the Monster Manual to learn that it is the strange cross breed of two otherwise very normal creatures.  It got me thinking about all of the bizarre monsters out there that are nothing other than the physical qualities of several others merged into one very awkward beast.  It strikes me as a very Gygaxian concept, just sort of fill up the pages of the Monster Manual by coming up with a weird name and mashing animals together.  What else is out there? Is the leucrotta the king of the haphazardly assembled jungle?

I should also note that some of these creatures may actually stem from mythology and I’m just not familiar to them, but as the author of the original Monster Manual I am attributing Gary Gygax with their existence.

I decided to put together this quiz of strange monsters from the lore of D&D. Lets see how you do.

1) This chaotic evil creature has the head and antlers of a deer atop the body of a giant eagle. And for some reason it seems to cast the shadow of a human as opposed to that of an eagle mixed with a deer. It also requires the heart of another creature to reproduce, which must make sex very awkward.

2) What do you get when you mix a monkey, camel, lion and eagle? Some sort of awkward desert dwelling, friendly creature that is known for it’s practical jokes and good natured teasing! And who could ever forget it’s gaze power, called sun sparkles.

3) This creature combines the body of a stag, a lion’s tail and the fearsome head of a giant badger! Rather than teeth it has “jagged boney ridges”. (I’m no dentist, but I’m pretty sure that’s sort of what teeth are anyway.) They are also able to imitate the voice of a man with uncanny skill despite living a miserable solitary life far away from the world of man.

4) Oh, those mad wizards! Always getting mixed up in secret magical experiments that create creatures like this mix of a snapping turtle and armadillo infused with demons’ ichor.  I wonder if the wizard’s intention was to create a constantly hungry, fearless creature that loves to eat Halflings, or if that was just something that sort of happened?

5) This aquatic animal possesses the head and torso of a horse and the lower half of a fish. All of it’s limbs end in fins and it’s body is covered in scales.  It is also super lame and speaks a language that no one cares to learn.

1st Edition, The Ghost Tower of Inverness and premade adventures

I was feeling a bit nostalgic lately and sort of really wanted to play some old school 1st edition Advanced Dungeons and Dragons.  There are so many retro style D&D clones out there these days, but I don’t think that they really interest me.  Most of them are just a stripped down easy to learn fantasy game, but lack the personality and daring that truly define the early versions of D&D. So I decided to go back to the source and run a one shot adventure using a module. I didn’t want to start up a new campaign (I have a Shadowrun game going on currently and I certainly don’t need two games a week in my life right now) and I didn’t want to spend a lot of time writing an adventure so this seemed like a great way to dip into the game and then jump right back out. After much searching through all of my old modules I settled on the classic C2, The Ghost Tower of Inverness. 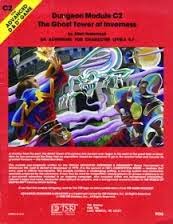 I’ve written before about my general dislike of dungeoncrawls so I won’t go into the reasons why, but the Ghost Tower seemed workable.  For starters, the dungeons of the adventure are so absurd that it’s easy to throw plausibility out the window and just accept it for what it is.  I’ve seen it referred to as a “funhouse” adventure and that makes total sense.  The premise is that the PC’s are all the prisoners of some Duke and he frees them from his dungeons in order to have them retrieve the fabled Soul Gem and bring it to him in exchange for freedom.  The Gem was the possession of some wizard who constructed an insane tower filled with monsters and traps to protect the Gem. Eventually the wizard disappeared but the Gem remains! Alright, that’s not too bad.  I suppose one could ask some questions about why the Duke (who has tons of resources at his disposal) is choosing this motley crew of vagabonds to undertake this important quest, but whatever. If I start asking questions now I’ll be at a million words by the time I reach the underground chessboard that electrocutes people when they make a wrong step. Ghost Tower was originally a tournament module run at Wintercon VIII in 1979 and featured five characters, so I rounded up five players to fulfill the roles of Lembu, Discinque, Hodar, Li Hon and Zinethar the Wise.  And we’re off…