Zurich is a Trap: More Thoughts on TTR Europe

I’m sure that Zurich is a beautiful city and it’s residents lovely people, but to me it is nothing more than a horrid trap encased by mountains. At least as far as Ticket to Ride Europe is concerned, which is more and more becoming the lens through which I view geography. 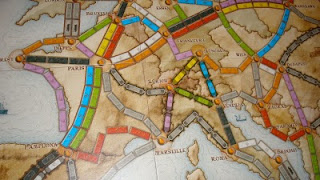 At first glance Zurich seems so appealing. It has four routes that run through it and it connects to a bunch of major areas, it has a great location. So why is it such a trap? Well, for starters every one of the routes that run into it is a tunnel which means that you will probably not be getting a real good return on those trains you put down. Plus, they are all real short. Three routes of two and another of one. No thanks. Like I’ve said in the past I think that TTR-Europe is really a game of board control and getting value out of each of your 45 trains. Not to say that tickets are not important, just not as important as in the original version of TTR. Zurich can be part of a winning plan as long as you just dip into it and get out, spending three turns or so placing trains through the mountains definitely puts you at a disadvantage.

The two games (TTR and Europe) are virtually the same, so why the difference in strategy? Well, the map of Europe is sort of a mess and certainly uneven. There are some very strong regions to claim (mainly the upper right section of the board) and others that are not very conducive to winning (such as Zurich and the surrounding mountains), and if you can lay claim to the high value areas it gives a distinct advantage when it comes time to tally those points. More and more my strategy is to get three or four tickets that work well together and end the game. It’s been working well for me lately. Being the player who initiates the end game is more valuable than an extra ticket or two, at least I think so. If I don’t get one of the 20+ point tickets in my initial draw I try to end the game quickly by focusing on routes of four or more trains, anything less than that may not always be worth it. Of course the chance of all of your tickets fitting neatly into four train routes is nonexistent, but I use that as a guideline when trying to figure out where I am going.
Posted by Fran at 3:52 PM